What would sports be without cliches?  Let’s face it, some of the ones announcers often use are downright hilarious:
“What it comes down to, is the team with more points is going to win this game.”
“She’s a hard worker!”
“What an athletic play!”

Some would say many of these cliches are played out or even should be retired forever.

But the thing with cliches is that they are said so often because they are true at their core. During the Lightning’s championship run, here are the 5 cliches that our team embodied.

As mentioned in Part 4 we had many reasons to doubt ourselves, including early-season losses and key injuries. When we reached the playoffs, we saw in the bracket that we’d have to beat 3 league rivals, and win all three, on the road. We could’ve seen this as one insurmountable task but we chose a different route. We took it one game at a time. A lot of this was a credit to the way Coach Ty not only coached each game individually, but how he set up the team culture to enjoy the moment (see Part 2).

As mentioned in Part 1, we had a lot of guys who could play. Fifteen different guys scored, 13 got assists. In the playoffs, we had several first time scorers/assisters.  Each goal was celebrated the same, no matter who scored it.  Of course, we weren’t perfect. There were moments when there was discontent, questions over playing time, etc, but overall those problems were worked out quickly.  Again it goes back to Part 2 – the culture and coaching demanded this cliche of the team, and the players chose to respond.

This one is tough to say because there weren’t many teams out there who I would say didn’t “want it.” But the extra work put in with early practices, and high accountability the players held each other to made just playing the game not seem like work.  How else to explain winning so many games on the road and in overtime?  We wanted it more, and we know how to get what we wanted. And the results came our way, sometimes in pretty fashion, and sometimes it was ugly. We heard plenty of whispers about being lucky, but I’m a big fan of another cliche – “you make your own luck.”  When you want it more, it’s funny how it seems less like luck, and more like destiny.

This one is so often true, that even though people are sick of hearing it, this one will never go away.  In our case, when we dedicated ourselves to defending with purpose and urgency, that’s when the team really started to gel.  Our center back won Oregon State Player of the Year, and our Goalkeeper could just as easily have won that award (he was consistently hailed as MVP! MVP! by his fans in the stands game in and game out and he was Goalkeeper of the Year for Oregon)

Everyone wants to see goals in soccer. But the reason there are so few is because it is hard to score. We just made it that much more difficult for other teams to score.  “You can’t win if you don’t score” is another cliche, I believe.

5. We peaked at the right time

I chose this as the final cliche, because I feel like it sums them all up.  And it bookends the first cliche (Taking it game by game). We knew going into the season that we had a great chance to win a title. Even with no school history of doing such. We were able to sustain that belief, and  learn and grow, and improve. We got to know each other better, build chemistry, no matter which players were in the game.  And by the end of the season, with each success, our confidence grew a little more, a little more, until we headed into that final match with the peak level of confidence.  There was as little doubt in our players as I think I have ever felt going into that final game.  I can still remember how it felt heading from the locker room out to the field, knowing that there was work to be done, but at the end it would go our way.

As of this writing the 2021, shortened/postponed/Coronafied season is getting set to start.  This year’s version of the Franklin Lightning is has “a lot of pieces returning.” Let’s see if we can “gel again and get it done.”  See if we are “capable of making a deep run.”  This team has “a chance to do something special.” We have to “remember what got us there,” “act like we’ve been there before,” and remember that “There will be no one to stop us but ourselves.” 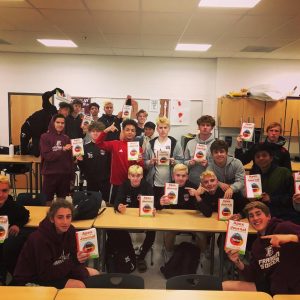 Having a built-in expert in sport psychology is rare and is something that not many teams, let alone high school teams, have.