Share on facebook
Share on google
Share on twitter
Share on linkedin
Thanksgiving coming up. As we all know, it’s a time to slow down, gather with family and friends, and give thanks for all that we have. It’s a needed time of the year, because during the daily grind it can become easy to be more focused on what we don’t have!  So a time of the year to give thanks and be grateful. In other words showing, “Gratitude.”

What does this have to do with sports performance?  The pressure, the intensity, and the daily grind can change an athlete’s perspective over time:  The enjoyment can be replaced by timidness and dread, the opportunity replaced by obligation.  When this happens, performance is likely to suffer.  In the past couple months, I have seen this concept has come up a lot with my athletes.  Deliberately and mindfully taking the time to show gratitude during training and competition can improve performance by returning the feeling of perspective, control, and enjoyment.

So how do athletes “give thanks” and how does that help with performance?  Again, it’s a matter of perspective.  Giving thanks to the situation you are in, not being stressed about it; being thankful for the opportunity you have and not dwelling on what you don’t have or wish you had.  Here are a couple of examples from SPINw athletes:

A highly rated high school baseball player I worked with was having a hard time living up to his own expectations. There was some external pressure to be sure, but nothing that outweighed the pressure he put on himself.  To introduce gratitude for this young man, part of his pre-game routine became to step out on the field before anyone shows up, and be thankful that he’s playing. A short giving of thanks that he’s choosing to play the game and grateful for the opportunity. This young man did end up earning a scholarship to play college baseball.

Another athlete is a college golfer, a natural athlete and fierce competitor.  Over time she has become used to get all bent out of shape over bad shots, being disappointed with failure and unable to recover, sending her game into a tailspin. We worked to have her approach every shot as a challenge to be embraced and enjoyed, and not look at it as such a huge mountain to climb. One idea she had that she has stuck with ever since is to write the word “Gratitude” on her glove. That way she can prepare for each shot with a clear mind.  Her performance is steadily improving as she re-gains control over her thoughts and emotions through gratitude.

Working with a sport psychology consultant was a great way for these athletes to examine their mindset and change perspective to one of gratitude rather than worry. A good coach can also help in this regard. By leading and communicating in a positive way, coaches can instill confidence in their athletes.  Legendary UNC basketball coach Dean Smith was famous for his ability to instill gratitude into his players.

Check out this book for more!

Coach Smith’s former players consistently recount stories like this one:

“It seemed like everything we’d work on in practices, at one time or another, would pop up in the game. I remember in tough situations when we needed a last-second shot or the fans were yelling in the huddle and we couldn’t hear, Coach Smith would always lean over and… he would tell us in those tight games, ‘Isn’t this what you came to Carolina for? Isn’t this fun?’ That’s how he was in every huddle. He used those as an opportunity for us to showcase our skills and what we had learned and worked on throughout the year in practice.”

By changing perspective to one of gratitude and being in the moment, Coach Smith would get the most out of his players. And so have the SPINw athletes who actively worked on changing their perspective and approach to stressful situations.

With that, the SPINw team wishes you a Happy Thanksgiving! 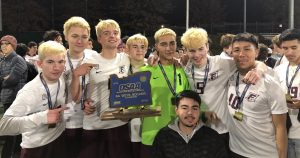 What would sports be without cliches?  Let’s face it, some of the ones announcers often use are downright hilarious: “What it comes down