On Monday, we set off for Education City stadium for what turned out to be the most entertaining match we attended: South Korea vs Ghana

In a tournament that saw five 0-0 draws in the first round, this one was quite the opposite.

South Korea began the first 20 minutes in the Ghanain end, but couldn’t find the back of the net. Ghana scored off of a set piece and a cross/header to go into the half up 2-0.
South Korea came out on fire and leveled the game on 2 crosses and headers by their forward Cho Gue-Son.  Ghana got the game winner on a second goal by Muhammed Kudus. South Korea again dominated the last 15 minutes of the game with cross after cross, but great saves by the Ghanaian goalkeeper kept the ball out of the net.

On Tuesday, we had a day off of games, until the USA – Iran match (10pm Doha time), and some free time to explore. We took a tour of the South coast of Qatar.  On the top of the priority list was to go on a camel ride, which we did with a couple fans from Argentina.

Except for the miles and miles along the coast full of oil fields and refineries. The ugly side to the main driver of the entire world economy. On the one hand, it’s made this country extremely wealthy, and creates opportunities for employment, innovation, and growth. But on the other, climate change and pollution are the wasteful by-products.

This was it, the game everyone was waiting for – the USA came in with 2 points, and Iran with 3 points.  A draw would have been enough for Iran to go through to the next round, while the USA had to win.

Not wanting to miss a minute, we arrived 2 hours before the match, and we weren’t disappointed. Thousands of fans were there too, enjoying the scene outside the stadium.  It was extremely festive, with fans of both teams (and other nations as well), all decked out and ready to go.

With all the governmental/political issues between the two countries, many were wondering how the game would be.  But there’s politics and there’s people.  This was pure people.  My friend Tom and I were decked out in our red, white, and blue, and we estimate around 40-50 Iranian fans asked to get pictures taken with us.  And vice versa.  I’m sure we are on social media all over the world 🙂  It was nothing but love and respect, and it was beautiful.  One fan asked to take a photo with us, but said he had to fix my gutra (head covering).

After that, it was on to the game.  I was lucky enough to have seats very close to the field.  The atmosphere was electric, and the Iranian fans (at least in my section) were way louder than the USA fans, mostly due to these plastic horns (kinda like vuvuzelas, but louder and more annoying).   Expectedly, Iran played for the draw and sat back and defended.  The USA put on a dominating first half performance, and got the goal they needed from Chrisitan Pulisic. They almost doubled their lead, but Tim Weah was judged to be offside.

As expected again, Iran came out strong trying to tie the game up, but the USA were determined to win, and defended well.  There’s not much more I can say about the game that everyone reading this didn’t see for themselves, but I did get some great pre game photos.  *Would post a few videos, but facebook and instagram will not allow any video from inside the stadiums to be posted 🙁

That’s it for now. Except that we have extended the trip to be able to attend the Round of 16 match vs Holland (or is it the Dutch?  Or the Netherlands?)  Stay tuned for more! 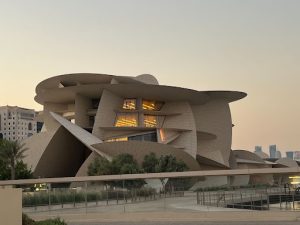